You shouldn’t fear your first steps getting out of bed in the morning. If this sounds familiar, know you are not alone! 17% of the general public will have foot pain at some point. Often this goes away, but far too frequent symptoms remain. What is your best option? It depends on the assessment!

Our average patient has suffered from pain for more than 6 months and seen 2-3 other providers before finding relief in our office!

Our services aren’t for everyone, but If you are tired of that annoying, frustrating pain that just won’t go away, we invite you to schedule a consultation with us to start getting answers!

Testing for Foot and Ankle Pain

Stand split stance against a wall. Place a ruler along the floor closest to the wall. Bring the knee of the front leg to the wall. Continue sliding the foot back along the ruler until you find a place where the heel of the foot lifts up before the knee hits the wall. How far did you go?

If it is short of 6”and you have foot or ankle pain, you are a candidate for care. Start finding answers to your problem by setting up an appointment today! Click below. 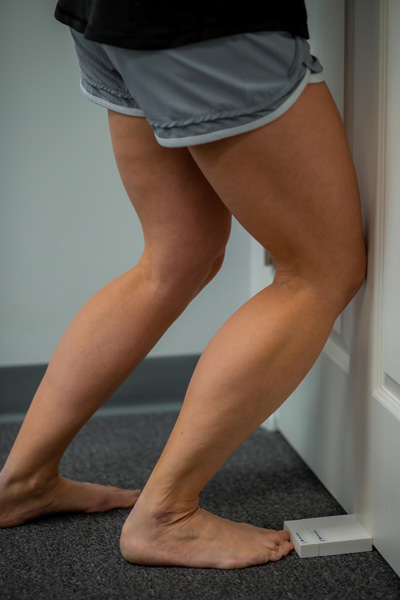 Our Treatment Can Help:

"I have been running since the age of 15, raced in college and recently ran in the 2008 Olympic Marathon Trials. I was basically injury free until 2 months post trials. It was at that point that the 140 miles per week caught up with me and my idea that I was "indestructible" was put to rest. Running to me is like sleep; a necessity to function properly every day. When I discussed this with a client of mine, she immediately referred me to Mike Danenberg. I have been a firm believer in his services ever since.

Mike was able to correct a hamstring problem in a very short period of time to allow me to race a marathon. After that, I had a major accident on the trails in which I thought my running would be sidelined for months. Mike was again able to fix that problem with ART treatments and had me back running immediately. I then managed to have another issue in my right leg that allowed me to run no more than 4 minutes at a time without excruciating pain. Mike assured me that my running career was not over and with several treatments I could come back strong. A few weeks later I was up to an hour of running again. I can't thank him enough for helping me through this tough year of injuries. I now know that it is important to monitor even the smallest pains and twinges in order to prevent more serious injuries in the future.

I have referred many of my teammates, friends, and even my fiancé to Mike. He has been able to help all of them get back to normal training schedules. As a Registered Dietitian and Certified Personal Trainer myself, I am certain that Mike knows his stuff! He is able to describe to me exactly what he is doing and the reason for the treatment. I will continue to highly recommend his services in the future!"